I will be the first to admit that I have more than just a little dental anxiety. I'd even be willing to classify it as a neurosis...I would even go as far as to say that it could be categorized as dentophobia.
I definitely go through the "cycle of avoidance" in that I NEVER go in for regular check ups or cleanings. I wait until I am in pain and then go in in crisis mode and end up having to have a whole laundry list of procedures done... root canals, abscess, pulp capping, multiple fillings, extractions.... NO BUENO.
My personal dental experiences have been nothing less than horrific.
Disclaimer - DO NOT read further if you have dental anxieties and are easily freaked out. I will be detailing my horrifying experiences. However, if you are morbidly curious or need motivation to maintain your regular dental appointments - a "don't let this happen to you" - then please, read on....

My earliest dental memory was at approximately the age of six. I had been racing bikes with my cousin and a couple of the neighborhood kids. At one point I look back over my shoulder to see how far ahead I am and steer my bike, at full speed, directly into the back of a parked van. I was a bloody mess. Four teeth, thankfully all baby teeth, were broken off at the gum line and one of them went through my lip. I spent a few hours in the emergency room that afternoon getting stitches in my lip, I still have the scar, and had to wait until Monday to go in to the dentist so that they could dig out the root structures of the four teeth that had broken. This was my regular dentist for a LONG time. Lets call him Dr Black (since that may or may not be the opposite of his real name).
It was a while until I had my next horrific dental experience.
When I was 18 I had to have my lower wisdom teeth pulled. Dr Black said that they could be pulled under local anesthetic, Novocaine, and nitrous oxide if needed. At that time he informed me that he wouldn't touch the upper wisdom teeth.
He said that the wisdom tooth on the upper left didn't need to be removed at that point so why go in there since the uppers can be more difficult and painful. Then he told me that on the upper right I had TWO wisdom teeth. Yes, TWO. I'm a freak. He told me that he would never touch those because with how far up the root structures went into the cheek bone area, that if not done right the result could be facial damage and because of this he would never touch them, that I would need to see an oral surgeon. Fantastic.
The day I went in to have the lower wisdom teeth pulled I stayed awake all night the night before at the suggestion of a friend. She had told me that if I was exhausted and on nitrous oxide that there was a good chance I would sleep through the whole ordeal. No one has ever been more wrong in their entire life.
I was loaded up with Novocaine and he started digging in. Even being numbed I was still experiencing pain and pressure. So, he gave me more Novocaine and turned on the nitrous. I still felt uncomfortable pressure, so they turned the nitrous up. Then the Novocaine started wearing off, so they gave me more injections.
This cycle kept repeating itself, the Novocaine would wear off, they'd stop to give me more injections. It finally got to the point where he said "I've given you the maximum Novocaine I can safely give you, the nitrous is turned up to the maximum level I can safely have it at, but we're too far in to stop". It was so incredibly painful, and all I could do was sit there and cry through the rest of it.
As an added bonus, I got dry socket almost immediately afterwards. That is a pain I would not wish upon anyone. Seriously, it was the worst pain I have ever experienced.

and thats all I remember of the dream. Seriously? WTF? Nice little peak inside of my twisted brain, huh?
Just to note - I think the part about taking the valium got put into my head because every friend I talked to the night before asked me if they had given me a valium to take in the morning. Apparently all of their experiences of being rendered unconscious for dental procedures was via valium as opposed to general anesthesia.

I went to my appointment Thursday morning and had no issues at all. I sat in the chair, they put in the IV of a saline drip and the oral surgeon came in. He said "You look like you are a nervous wreck". I told him yes, that my anxiety was rather high, and he said "Well, I'm going to give you some stuff here thats going to make you feel like everythings alright with the world."
Thats the last I remember.
The next thing I knew, I was being woken up so that I could get into a wheelchair and was wheeled out to my car where my mom was waiting for me.
I was pretty much prepared to get dry socket almost immediately like had happened when Dr Black removed my lower wisdom teeth so I kept myself heavily sedated with various strengths of vicodin the rest of the day Thursday, all day Friday, and part of Saturday and Sunday.
To be honest, everything has gone rather well. Yes, I have been sore and tender but that is to be expected with what I had done and it has been getting better daily. I haven't gotten dry socket, I haven't been in excruciating pain, and I even felt up to running a couple of minor errands Sunday.
Looking back at my dental history, I think I can attribute a great portion of my dentophobia to repeatedly returning to Dr Black. Looking at all of this objectively, I don't think he's the best dentist out there.
However, I do think I have found a good dentist. Friday, while I was recovering, my dentist called me personally to see how I was doing, how I felt and how I was recovering. Granted, I was sedated so he left me a message, but still... he followed up personally. Any of my experiences with dentists or doctors or anything of that nature in the past was that if they followed up at all, it was a receptionist or assistant who did it, not the dentist or doctor. Also, in my initial appointment last Tuesday, Dr Thompson said that once the surgery was done, before proceeding with any other procedures, he wanted to talk about my dental anxieties, find out why they were so extensive that I would willing go as long as I do without having these issues addressed so that he could tailor his approach to suit my needs.
I think I may have found a good dentist. Its an abstract concept for me.
I will be making an appointment to go back in and have all of my other issues addressed and I think I will take him up on the offer for free whitening. I just hope it doesn't turn out like this (it's long, but watch through to the end if you haven't seen it already. Heck, watch through to the end anyways because its funny):

Posted by Vanessa at 6:37 PM No comments: Links to this post

I Blame The Drugs

If this post makes no sense at all, blame the drugs.
I've been taking massive amounts of vicodin over the past couple of days due to a toothache. A horrible horrible horrible toothache.
I haven't just been taking vicodin, I've also been mixing it with large amounts of acetometaphin, and at times.... booze. Like this morning I drug myself out of bed to go to a friends bon voyage brunch before she leaves for Nepal tomorrow. There I had a couple of bloody marys... that made for one sweet sweet nap once I got home.
Why do I have such a horrible toothache? Because I'm a giant wuss and am afraid of the dentist. I will avoid the dentist at all cost. Yes, when an issue pops up I am aware that if I went in and had the issue addressed right then, it wouldn't be too big of an issue and that if I put it off its only going to progress into something horrible. Like what I have right now. But, I put it off because to me, a trip to the dentist is an awful experience, rife with pain and blood and lectures about brushing and flossing. So, I put off the needed dental appointment until it is a self fulfilling prophecy in which I am in pain like I am now.
So, there you have it. I am phobic about going to the dentist. I'm sure theres a technical term for this condition, but for now I'm just going to call it "hurts-my-teeth-achondria" or "pain-in-my-mouth-aphobia" or maybe "ouch-my-tooth-aphobic" or even "don't-put-that-in-my-mouth-achondriac". Actually, I'm thinking that last one could apply to a lot more than just a fear of the dentist.
The only thing that I didn't factor in to my phobia surrounding the dentist is the 12+ year old black lab lying at my feet and farting like I have right now.
Over the past 2 days I've been neglecting my doggy babies. Since I got home from work Friday, my routine has been this:
take vicodin, let the dogs out, sleep, take vicodin, let the dogs in, sleep, take vicodin, sleep, take vicodin, eat something, sleep, take vicodin, let the dogs in, sleep... you get the gist.
Sam and Cooper are feeling a bit neglected. Coopers being more vocal about it, sitting here next to me saying "arawwrrawawarr" which we all knows translates to "pet me and give me pup-peronis, NOW PLEASE!"
So, now I have a dilema. I'm low on vicodin - I have enough to get me through tonight and possibly through tomorrow. My mom went to refill my prescription... a prescription that was given to me for a different ailment last summer. The pharmacy said that they can't refill my prescription because the original prescription was given to me over a year ago. This is not true. I just dug out the other prescription that was given to me at the same time and I got it last July. Do I go back to the pharmacy myself in my ratty pajamas and unkempt hair and smelly unshowered self and argue with them, or do I just make do with what I have until my dentist appointment Tuesday morning? 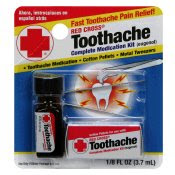 It works okay, takes the edge off of the pain. I think that if I were dealing with your typical cavity pain that this would work perfectly. However, since I think I'm dealing with root canal pain it just takes the edge off - takes it down a couple notches to a dull pain.
The drawback, it tastes like death. Death with a slight clove like aftertaste.
Posted by Vanessa at 5:31 PM No comments: Links to this post