The past couple of months I've gotten a little introspective, looking at the things I like and don't like about myself and how I'd like to redirect my life and the things I'd like to change.
Theres nothing major, just a lot of little things and many of them are very superficial.
Perhaps it has something to do with having turned 30 last year but I just feel so incredibly frumpy and I'm tired of it.
I think my complexion is always dull, my hair is always pulled back in a ponytail or one of those half assed buns on top of my head, and I'm always wearing jeans and some tired t-shirt.
So, this past week I've done some shopping. I've bought some shoes, a couple of cute skirts, even a sundress. Wearing them to work the past week has drawn some attention, especially considering my typical wardrobe of jeans and a tired, frumpy t-shirt.
I've also been wearing my hair down, curly, and have been wearing a little bit of makeup - which I don't normally do either.
The complexion -- I've been using Immortelle Brightening Polish by L'Occitane. I think it works great, I don't know what it is or how it works, but after using it a couple of times there is a considerable improvement in my skin - more of a glow. I've also ordered this trio of products in Olive Forte from Laventine. Its gotten great reviews all over the web, and I tried some of the facial wash before ordering it.
Even after using the Brightening Polish I felt there was still room for improvement for my skins texture and clarity, and it still looked a little dull at times, so I was at the store tonight and picked up this skin polishing kit and used it as soon as I got home this evening. So far it seems like its made a difference, my skin feels smoother and seems even clearer and brighter. I'm thinking that by the time the Laventine products arrive I will have my skin regimen down pat - just in time for summer, and my 31st birthday.
Thats just some of the superficial stuff though.
I'm tired of being so passive, I allow people to.... disregard what I have to say a lot of the times, to talk over me in conversations, cut me off, stuff like that. Its one of my biggest pet peeves as well.
Posted by Vanessa at 10:32 PM 9 comments: Links to this post

You Can't Even Afford An Airplane!

Why are the weekends always so damn short?
Friday night was great, I started it off by leaving work 2 hours early and hanging out at the pub until the very last minute when I had to leave to go to my brothers high school graduation. considering he was graduating from a very small private school with a graduating class of only 38, you would think the ceremony would be fairly short. You would be dead wrong.
First, there were 3 girls tied for valedictorian. All 3 spoke. All 3 thanked each individual member of their family and each individual member of the school staff. The third girl to speak had learned how to use Power Point the month prior and put together a slide show consisting of 3 pages of pictures of every single graduating senior. Then the principal spoke. The principal is also the pastor of the church (its a christian school). He spoke to every single senior. THEN, he gave his testimony. I actually thought there was going to be an altar call.

At that point I started to itch, because I'm a heathen.

The timing was great though because I was going to pick a friend up from the Oakland Airport. Shauna, thank you for flying into Oakland on Friday night. You saved me from what had to be the longest high school graduation ceremony in recorded history.
Picking up Shauna was definitely worth the drive to Oakland and back. We were able to catch up on a lot, and its great to see an old friend whenever I have the chance.

Saturday, I slept in then that night I went to Kelly and Megans for a girls night. Several beers were consumed, snickers cake was snacked upon, and I discovered that Megan and I make a formidable team for Pictionary.
Sunday I went over to my cousin Erins and hung out with her and her parents while they figured out her wireless internet/phone/cable/tivo set up. I also napped with her cat Turtle. He has got to be one of the best nap buddies ever - the epitome of cuddlyness.
Before going to Erins I had to take my grandma up to Placerville to pick her car up from the mechanics. About a month or two ago I decided that what I'm going to do as my birthday present to myself is take an introductory flying lesson. On the way up there from Sunrise and Highway 50 we could see some of the airshow that was going on over at Mather Air Field - at that time they had the small planes doing the aerial acrobatics, which I figured was a good time to tell grandma that I'm going to take flying lessons.
Appropriate timing, don't you think?
I'm anticipating her response to be something along the lines of "dangerous, blah blah blah, assinine, blah blah blah, JFK Jr, blah blah blah, what do you need to be up THERE for, blah blah blah, assinine" so, I brace myself.
"Grandma, I've figured out what I"m going to do for my birthday"
"What?"
"Take flying lessons"
"Great. Just what we need, a PILOT in the family" - now, I cannot express in words the tone in which that was said. The closest equivalent statement would be if you substituted "PILOT" with "DOMINATRIX" or "CAR THIEF" because, as you know, my family - with its addicts, petty criminals, and numerous unwed mothers - is the epitome of white middle class decorum. But, the minute someone becomes a pilot, its all down the crapper.
"Grandma, you know it does take more than 1 lesson to become a pilot. I'm not saying I definitely want to get my license, but if I like it after the one lesson I may end up doing that but it would take a while to actually get my license."
"You can't even afford an airplane!!"
I love her thought pattern here - you want to learn to fly? you're going to have to buy an airplane - too bad you can't afford it. Essentially she's saying "keep your ass on the ground where it belongs"
Erins mom thinks I should make a fake sales contract for a Cessna, take the one lesson and tell granny that I LOVED IT then ask her to cosign on a Cessna. We torment her because we love her.
Posted by Vanessa at 10:01 PM 3 comments: Links to this post

Its been a full week.
I've been spending a lot of time at the pub, my time there is not completely spent drinking - I socialize with friends and also use it as some valuable knitting time. I also run into other bloggers, like Tanya (on the right) and her friend, Janet. 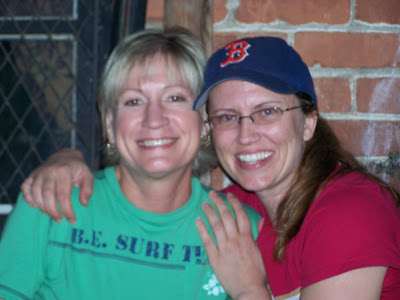 This week I decided that I wanted to make Beth's Little Star Afghan. Its a pattern that I've wanted to make for a while, just was awaiting the occaision, and that occaision would be my cute little niece.
I showed the pattern to my cousin Erin, and she had a BRILLIANT idea... make it look like a starfish. So, I doubled up the yarn and did the center with orange and white and the outside with blue and green.
Here is the finished product: 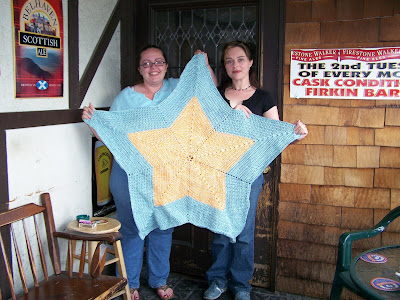 Thats Erin on the right. She doesn't consider herself to be a crafty person, but she had a great idea, don't you think?
Since I doubled up the yarn, this workerd up INCREDIBLY quickly. I started the starfish section (the orange and white) at the pub Thursday evening, and finished the orange section the same evening while still at the pub. The blue and green I started when I got home that evening - I worked on it a little bit that night, a little more Friday night, and finished it Sunday morning. In total, I would say that the whole project took somewhere between 8 and 10 hours.
This is definitely a pattern I will be using again and seeing how many different ways it can be adapted.
Melissa did a beautiful version of it here with some adorable matching pillows that I know I will tackle one day, once I get my "to do" list whittled down some.
The weekend was a blast,
Saturday afternoon/early evening I attended the birthday party of my friend Megan. her birthdays always have themes and this year it was the letter "M". People were dressed as Mary Katherine Gallagher, Memoir of a Geisha, Marlboro Man, a madam, I was Martha Stewart - I wore regular clothes and brought my craft projects with me - but, I think the best was my friend Phil. He threw on a mariachi hat with his regular clothes and claimed to be a mariachi man. We all thought that did not display any tremendous effort in costume until THE MARIACHI BAND HE'D HIRED SHOWED UP! Do you think I'm kidding? I'm not. 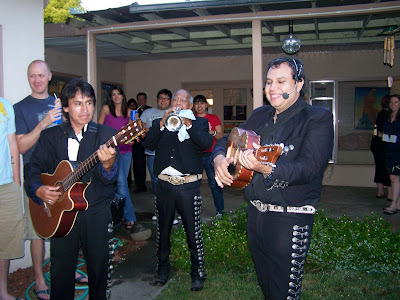 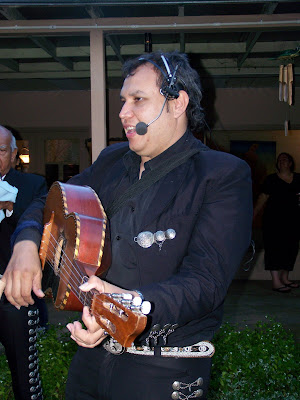 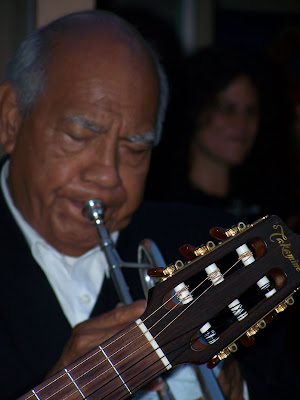 Phil is not one who could ever be accused of doing something half assed.
In fact, he went way further above and beyond that evening and got on stage at a concert to propose to his girlfriend of 3 years, Celeste.
She said yes.
My love and congratulations to the happy couple.
Posted by Vanessa at 10:21 PM 4 comments: Links to this post