I misspoke the other day when I said that my birthday started when my coworkers decorated my cubicle and brought in cake & ice cream. My birthday ACTUALLY started when our receptionist called my extension saying that there was something at the front desk for me... a bouquet of gerbera daisies from my friend Shauna.
I've known Shauna for a little over 6 years now, we met at work and between escaping the stress of the job by adjourning to various happy hour locales, and a shared love of beading and cosmetics, we formed a friendship. About a year and a half ago I was incredibly happy for her that she had found her love when she married Jesse. I was not so happy when she and jesse moved to Salt Lake City shortly thereafter.
Although we email frequently and phone occaisionally, I miss her dearly.

Amongst other things, for my birthday I received a gift card to Target.
One of the items I purchased with the gift card was this.. 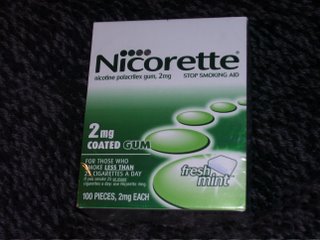 Thursday, August 31st will be my last day smoking. To get through the withdrawals i've got the Nicorette and have stocked up on some Life Savers mints and other gums.
Posted by Vanessa at 9:03 PM 2 comments: Links to this post

All in all, it was a great birthday. Probably my best birthday yet.
The festivities began Friday when my coworkers decorated my cubicle and brought in cake and ice cream.

I decided to celebrate my thirtieth birthday by doing one of the most juvenille things I could think of. Scandia.
Scandia is a "family fun center" with miniature golf, bumper boats, indy race track, batting cages and an arcade.
Friday night I met about 14 friends there and we did a half assed attempt at a round of mini golf, followed by bumper boats. we had wanted to do at least one trip on the indy race cars but evidently Scandia does not prepare well for Friday night crowds by having only 3 cars running at a time and then shutting them down for 30+ minutes to refuel. We missed out on the bumper boats but spent some time in the arcade playing skeeball and shooting hoops. Afterwards, we adjourned to the pub. 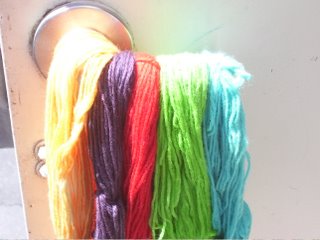 I crawled into bed much much too late and was woken up much much too early by my adorable 6 year old cousin who wanted to bring me coffee in bed. After spending the early part of the morning visiting with her and my aunt, I took a yarn dyeing class at my favorite LYS, Babetta's Yarn and Gifts in Fair Oaks.
the blue and green yarns on the right are my creations.
The class was taught by Babetta's eldest daughter, Maya and she was a great instructor. It was Kool-Aid dyed and I made one full skein using Black Cherry (not pictured), a half skein using Limeade and Blue Raspberry Lemonade (pictured), and a hand painted skein using Cherry, Strawberry Kiwi, Lemonade and Blastin' Berry Cherry (not pictured). It was a great class, VERY interesting watch the yarns absorb the color from the Kool-Aid mixture, but leave the water behind. I can't wait to experiment with mixing different flavors to acheive different colors and different handpainted looks.
An interesting fact... after using Kool-Aid dye, even after rinsing the yarn, it smells GREAT. It smells like the flavor its been dyed.

That afternoon after the class, I joined some friends at the pub for lunch and cake then made a run to find an outfit to wear to a wedding on Sunday. 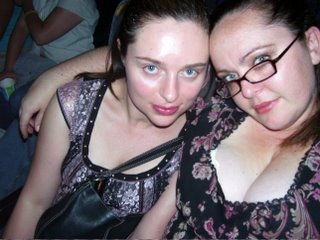 After shopping, I went to my lovely cousin Erins where the two of us got ready to go back to the pub. Once there, we were aboard a party bus as a going away party for a friend who is moving to Southern California. We bar hopped throughout the greater Sacramento area with plenty of carousing on the bus between different bars.
I made it back to Erins afterwards to grab not quite enough sleep before having to get up for a wedding in Isleton the next morning. The ceremony was beautiful and the reception was a lot more fun once I'd had a couple glasses of wine to combat the hangover from the previous night. 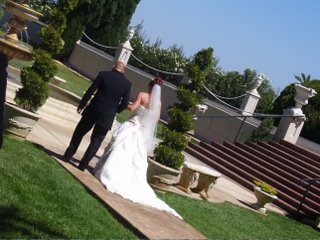 Posted by Vanessa at 10:12 PM 4 comments: Links to this post

since I last posted.

Have I been up to some time consuming adventures? No. Its been the same day to day routine: work, commute, knit, socializing with friends, etc.
Has my life been so incredibly boring that theres been absolutely nothing to write about? No. I've got a few things to write about:
- the ultimate DIY project
- current roommates
- pending roommates
- upcoming fiber workshops
- new hair color
- completed knit items (or nearly completed)
- new position at work, and new coworkers
- birthday plans
- sewer problems, and my grandmother
- from the mouths of babes
- doctors appointments (nothing serious)


There will be plenty to read about over the next week or two. To begin with, the doctors appointment.
When I was about 11 or 12 years old I started complaining to my doctors that my knees hurt all the time. They all brushed me off saying that it was just growing pains. While I was a chubby child, I was still fairly active with soccer, swim team, dive team, gymnastics, and I rode my bike EVERYWHERE.
As I got older, and got my drivers license, I got lazier. And fatter.
I no longer rode my bike everywhere, I drove, and by the time I tried to pick back up some of the activities I used to enjoy, they would make my knees ache incredibly.
For a few years now I've known that I have patellofemoral syndrome in both of my knees.
About 5 years ago, the pain started getting really bad, I couldn't drive my stick shift car through rush hour traffic without crying from the pain. That was when I was finally diagnosed with the tracking disorder and I initally went through some physical therapy to try to strengthen the muscles around the knee cap. At that time, my orthopedist told me that I would most likely have arthritis by the time I turned 30. That orthopedist knew what he was talking about, even if he did have the WORST bedside manner I've ever encountered.
i went to my doctor about 3 weeks ago and was diagnosed with osteoarthritis. I was basically told that the only thing I can do is to take tylenol or ibuprofen, and to lose weight. So, i may give Weight Watchers another try, possibly South beach, or that Mediterranean Diet that WebMD keeps emailing me about. I'm not sure, but I need to do something.
Posted by Vanessa at 12:45 AM 3 comments: Links to this post

I finished the crib blanket that I was crocheting for a friend, In general, I think it turned out well. However, there is one error, I think I crocheted the base chain a little too tightly. The end result is slightly trapezoidal. I'm hoping that some serious blocking will correct this but I fear that it may be beyond that.

The one finished item doesnt mean that I don't have a project to work on. Thats the beauty of having craft ADD. I always have a minimum of two, if not three, items on the needles. Current projects are:

1. FELTED MESSENGER BAG - knit - I'd started this one back in April thinking that I would take it to Ireland with me. Obviously, that didnt happen. I've completed the body and the strap, all thats left to do now is knit up some little pockets for it, assemble all of the pieces and then throw it in the washer. I'd guess it to be about 85% complete
2. SUPER SKINNY SARI SILK SCARF - knit - say that three times fast. I started this one today and its coming along very quickly. I'd estimate that its about 1/2 way completed.
3. GRANNY SQUARE AFGHAN - crochet - my little 6 year old cousin has been asking me to make her a blanket recently so I picked up some Bernat Softee Chunky in very bright colors and am crocheting an afghan thats one ginormous granny square. Its maybe 1/3 of the way done. This one will be put away for a Christmas gift. Oh yes, it will. I will not cave sometime around mid October and say "oh honey, you look cold. here, take this blankie I made for you".
4. FELTED PURSE - knit - yet another felted bag, but this ones worked in the round and I'm designing it myself. We'll see how it comes out. Its only about 1/4 of the way done.
5. PONCHO - knit - again, for the younger cousin. I have no idea why I'm making her yet another poncho. I've already made 4 for her, this one is with a yarn I picked up last year that was super cheap because it was being discontinued and some scrap eyelash novelty yarn. Its a lot lighter weight so I'm thinking it will be good for when she goes back to school in the fall. I'm only about 25% through this one.
6. AFGHAN - crochet - I started this one this evening. Why? I have no clue. Maybe because 5 projects in the works was not enough, or maybe because of the failure of the crib blanket I did. I'm using the same pattern, just making it large enough for a throw. This time, I did make the base chain looser.

These are just the projects that are currently "in progress". These do not include the projects I have lined up in my head, and there are many of those. There are projects from recent issues of both Interweave Knits and Interweave Crochet that I want to make for gifts and for myself, projects from Knit and Tonic, and design ideas of my own that have been floating around in my mind and sketched out in my notebook.
Posted by Vanessa at 3:04 AM 2 comments: Links to this post

Just a bunch of randon photos that blogger wouldn't allow me to upload the past few days:
The Forum section of last Sundays Sacramento Bee that mine and Mayas blogs were included in.
Yes, my forehead really is as large as the paper. 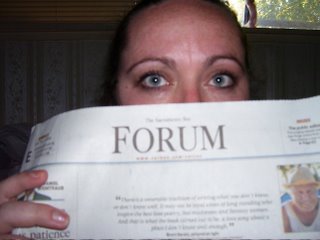 The idea of going to Chicago for BlogHer '07 next year had me thinking of traveling again, so here are some photos from my trip to Ireland in May that I hadn't posted.

The Guinness Brewery in Dublin - one of many cool parts of my trip. 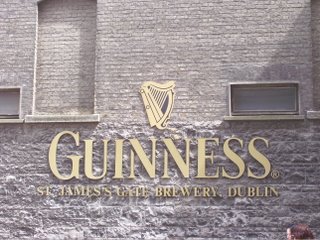 The "washing hole" in Adaire Village - originally this was where the women of the village would gather to do laundry, now its a beautiful little part of the park in the center of the village. 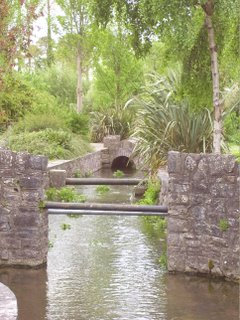 Taken from the top of Blarney Castle 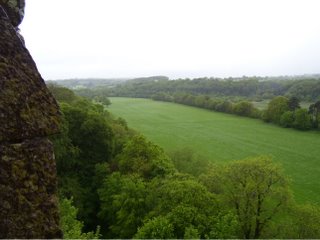 Looking down into the center of Blarney Castle 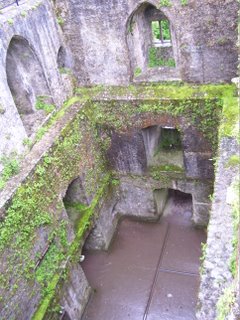 Me, in front of Blarney Castle. 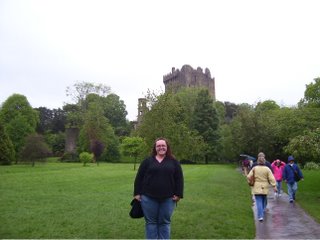 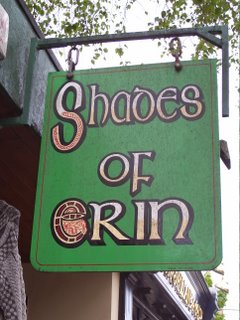 Posted by Vanessa at 8:59 PM 6 comments: Links to this post

I'm thinking of going to BlogHer '07 next year. It's in Chicago, a city I've always wanted to visit.
I'd considered going this year, but couldnt take Friday off from work and had plans for Saturday, but am thinking of going along with Maya next year.
I have a photo I'd like to upload, but Blogger STILL isnt letting me upload photos.
I must look into moving over to Wordpress or Moveable Type...
Posted by Vanessa at 6:04 PM 1 comment: Links to this post