Last week I attempted to make persimmon jam. This is a project that I mentioned briefly last month, and once there were finally enough fruits on the tree that were ripe enough, I set to it.

Now, there are two varieties of persimmons. The variety that most people are familiar with are called Fuyu - they're crisp, similar to apples or pears. During the late fall and early winter it wouldn't be too uncommon to see these at local farmers markets.

This is not the variety of tree that I have.

The variety that I have are called Hachiya. It would be unlikely to be familiar with this variety of persimmon unless you, or a neighbor, have a tree in your yard. The reason why they're not well none is simple: they do NOT transport well.
When a Hachiya persimmon is ripe it is very very very soft - holding a ripe Hachiya persimmon feels a lot like you're holding a water balloon, and they squish incredibly easy. When squished, the fruit inside oozes everywhere - the pulp of a ripe persimmon has a bright orange jelly like consistency, and that bright orange pulp is a bear to get out of clothing!
An unripe Hachiya persimmon tastes disgusting. There is an astringent flavor to it that removes all moisture from your mouth. Hands down, biting into one has been one of the grossest tasting food experiences of my life. Seriously, I would rather eat blood pudding if I had to choose.
HOWEVER, when the Hachiya persimmon is ripe it is fantastic. It is sweet and smooth and has an apricot like flavor that is heavenly.
Since I have a tree FULL of fruit I decided to try making persimmon jam, figuring that since it already has a jelly like consistency it would be an easy first step into home canning. Last Saturday I picked some fruit and set out to make some jelly for Christmas gifts. I'd bought the jars and lids, sugar, everything I needed and had selected a recipe that looked very easy. All it called for was 2 quarts of persimmon pulp, 1 cup sugar, 1 cup orange juice and the zest from one orange.
I pulped the persimmons and took an initial taste test to ensure that I had not included any under ripe fruits - everything tasted fine so I mixed together all of the ingredients and started cooking the jam per the recipes instructions.
Once everything was looking like it was ready, I prepped the jars for filling and took one final taste test of the finished product. I am so glad that I took that final test before actually canning the jam.
The astringent taste was back with full force. It was disgusting. I spent several minutes spitting into the kitchen sink "I CAN'T GET THE TASTE OUT OF MY MOUTH!!!!!"

Why it was initially sweet and apricot like, then after cooking disgustingly astringent I did not know.

Since then I have done some research and found that Hachiya persimmons have high levels of tannins, which cause the initial astringency. Once they've been through at least one frost the tannins evaporate, leaving the sweet pulp. HOWEVER baking reintroduces the tannins, causing the astringent flavor to return.
A couple articles that I read said that when baking with Hachiyas, the use of baking soda will offset the reintroduction of the tannins and effectively prevent the astringent taste from returning. But, I'm wondering if baking soda could be used when making a jam or chutney (yes, I found a chutney recipe using persimmons that sounded amazing and that I planned on making after the jam).

So, I'm left with all of the canning supplies but no canned product. I'm considering another attempt at canning and have found a couple of recipes that sounds great:
1 - pomegranate jelly
2 - strawberry balsamic jam
3 - cranberry tangerine chutney

I will admit that I am incredibly frustrated by this initial canning failure. I am fairly adept in the kitchen and I am very crafty. I frequently experiment with different recipes and crafts with various levels of success - some are fantastic and some are just okay. I am not accustomed to a complete and total failure. Part of my wants to throw in the towel, but the stubborn as hell part of me wants to keep trying until I get it right.

I think the fact that I've already lined up some additional recipes tells me that I'm going to continue with my attempts at home canning.
Posted by Vanessa at 5:58 PM No comments:

I have finally come to the realization that I am in dire need of a new mattress. I have to admit that I am 33 years old and have never shopped for a mattress. My current mattress was a birthday gift. For my 18th birthday. Its 15 years old and I must also admit that I have not properly turned/flipped/rotated it as it should have been. As a result I don't sleep as well as I should and constantly find myself with back, neck, and shoulder aches.
I have heard that the temperpedic mattresses are amazing but I know that I can't afford one. So I went where all people on a budget go when shopping for home furnishings.... I went to IKEA's website to look at the prices and options. I also did a little window shopping for bedroom furniture, naturally. Currently my bedroom is a mishmash of various pieces that I've picked up here and there. NOTHING matches, nothing is the same style, era, or even color. It basically looks like a small version of the furniture section at your local Goodwill. Not that theres anything wrong with Goodwill furniture - my nightstand came from the Salvation Army.
So, I assembled the bedroom of my budget conscious dreams.
First, the bed. Naturally. 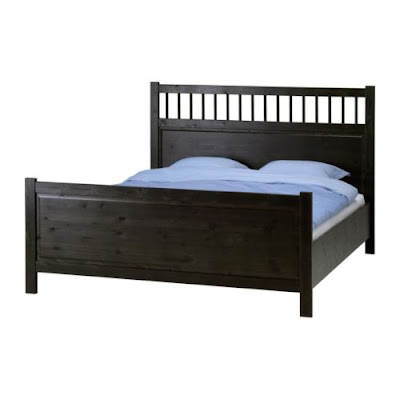 HEMNES. I like that its simple, and I like the black-brown stain. This could be adapted to a number of decorating styles by simply changing the colors and linens.

Next is what I think was one of the most ingenious finds on IKEAS website:
the SULTAN ALSARP FOUNDATION WITH STORAGE 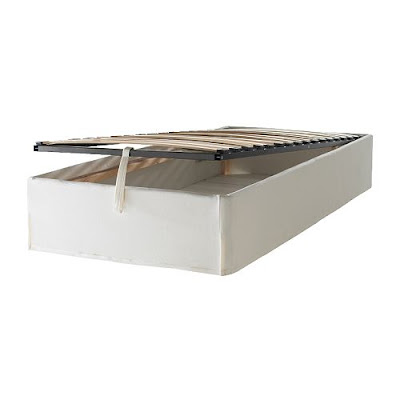 A hollow foundation mattress which would be perfect for storing the heavier winter blankets or even my winter sweaters. Would it be a hassle to get to those winter blankets and put them away? Certainly - but it would also force me to flip/rotate/turn my top mattress on a regular basis. GENIUS!

Then theres the HEMNES STORAGE BENCH 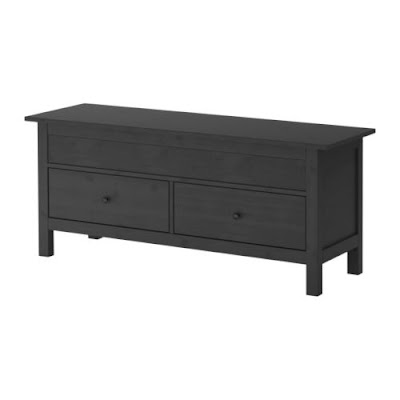 which would look lovely at the foot of the bed, n'est ce pas? Storage for linens and such.

Of course there has to be a HEMNES NIGHTSTAND 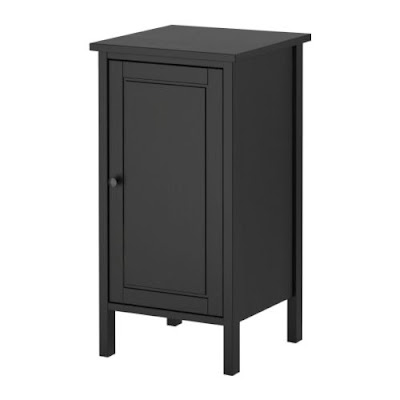 for my reading lamp and current book.

In one corner would be the ALVE WORKSTATION 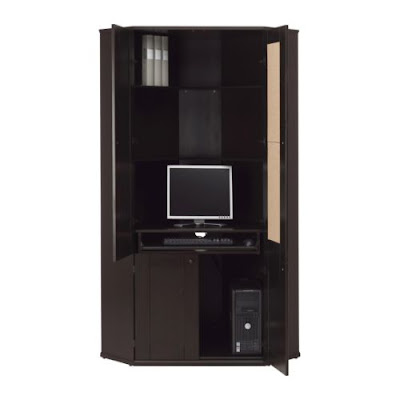 for the computer I don't currently have.

Underneath the window I would place the MARKOR BOOKCASE 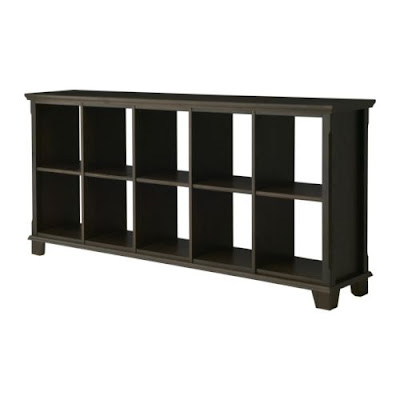 and next to it the ALVE BOOKCASE WITH DRAWER 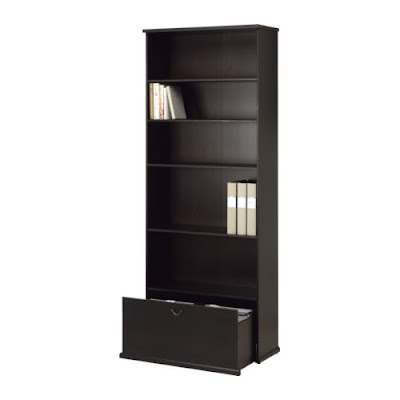 Yes, I do have that many books. Plus the drawer would be a great place to stash any current knitting or crochet projects.

Next to the bookshelves I would I have a cozy armchair, such as this EKTORP 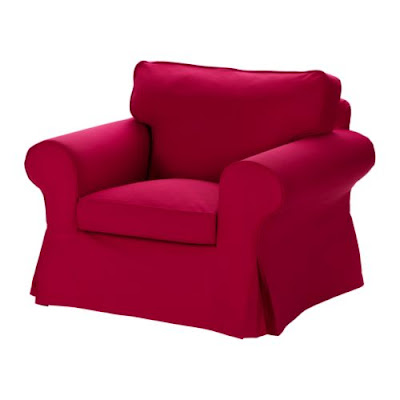 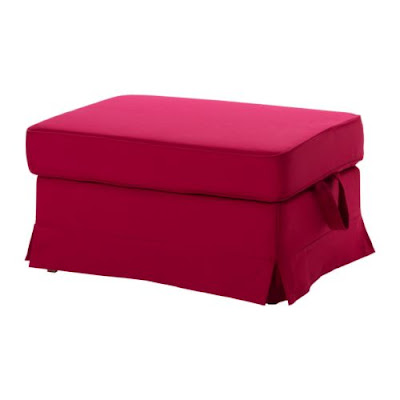 I could sit in the chair while watching TV, work on my knitting projects, or read a book. Of course I'm certain that Cooper would think that at least the footstool, if not the chair, was his.

And last, but not least, we have yet ANOTHER book/DVD shelf. Yes, once again, I DO have THAT MANY DAMN BOOKS.
This one is the MARKOR 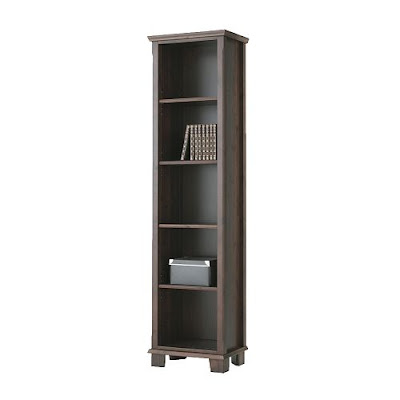 Of course there would also need to be a new wall mount flat screen... preferably 32" or more.
And no, I never did select a mattress. I'm figuring thats probably where my tax refund will go next spring, so I've got a couple months to comparison shop.

All of this furniture totals just $2,301.99, without taxes, not too bad for TEN pieces of furniture.
Posted by Vanessa at 11:42 PM No comments:

I've selected my first sewing project, and its something for ME.

I'm making one of these aprons - apron D, actually. It's the one on the far right. 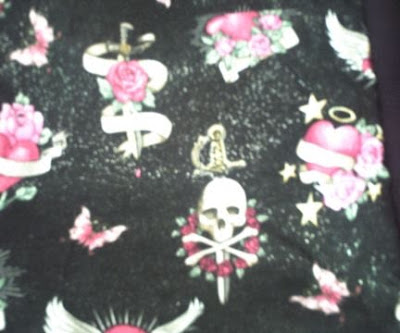 I know, you can't wait to see the finished product. Neither can I!
Posted by Vanessa at 7:10 PM No comments: