I've been sick for most of this week.
I finally called the doctor this morning and talked with the advice nurse - he thinks it sounds like I could have strep throat. GREAT. So, I went in today to be gagged with the giant Q-Tip. I should have the test results tomorrow morning.
In the haze of my sickness I've been drinking plenty of Hot Toddies - I firmly believe that enough brandy, lemon, tea, and honey will cure anything that ails you. Or at least it makes the illness a bit fuzzy around the edges.

Sis is out of the hospital and back home on bed rest for the duration of her pregnancy. I've been crafting away. I've finished the body of the "plaid afghan" and just need to weave through the colors now. I've started knitting a cap for when she's born, it should be finished tonight. Sis asked that I make one for the newborn photos that will be taken at the hospital. I've also started a new afghan - its a great pattern I got off the Project Linus website - I'm doing the Sideways Shell Baby Afghan. It works up fairly quickly, has great texture, and I've used it countless times.

I'll post pics of all completed items as they're finished.
Posted by Vanessa at 1:36 PM 2 comments: Links to this post

This week we found out that my sister is having a girl. Wednesday night she was admitted to the High Risk Maternity Ward for mild toxemia and contractions. Everything is being brought under control and the docs dont think its anything life threatening for either one of them, but they do want to keep her in for a couple more days and are thinking my little niece will most likely come a couple of weeks early.
Last week I had not started a single project for the kid, but now I am overflowing with them. I've been crocheting the plaid afghan I mentioned last week and am over half way through the body of it - next I just have to decide what colors to weave through. I also have a crib quilt started - I went with Winnie the Pooh, its a classic and gender neutral - I'd picked it out before we found out that the baby is a girl.
Yesterday was when I went a little nuts.
A yarn shop down the street is closing so everything is on sale. I picked up some yarn.
Then a fabric shop is closing as well so everything theres on sale too. I got even more yarn, and some cross stitched bib kits, and then some yarn. At this point, I'll still be knitting and crocheting for the kid when she has her own kids.
This afternoon Sis called from the hospital bored to death and begging me to bring her something to do. I took her the cross stitch bib kits, hung out at the hospital with her for a bit, and then came home to watch The Amazing Race. I've been in since, working on the plaid baby afghan, only taking a brek to paint my nails, and write this entry. I am going to be hauling these projects everywhere for the next couple of weeks, I've got a lot to do in very short order.
Posted by Vanessa at 9:25 PM 2 comments: Links to this post

Being an auntie is going to be SO FLIPPING COOL!

I am SO getting THIS for my pending niece or nephew.
Posted by Vanessa at 9:07 PM 1 comment: Links to this post

Where o where have I been?

Pretty much nowhere, really.
Since I haven't posted in three weeks you may have thought I'd taken off for someplace exotic or was on some adventure somewhere. So not true.
I did go somewhere though - two weeks ago I went to Redding for the 2nd birthday of a friends son. Other than that, I havent been up to a whole heck of a lot.
I did get my nose pierced though, see: 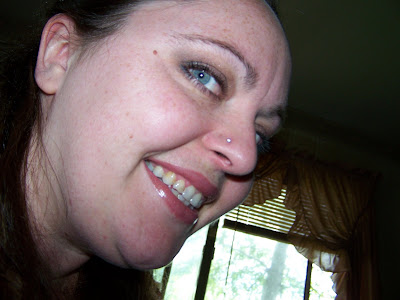 Yes, it did hurt. If anyone ever tells you that it doesn't, theyre full of crap. It wasn't too bad though, but it was tender for a few days afterwards. If you're ever inclined to have your nose pierced and are in the greater Sacramento area, I highly recommend Elton at American Graffiti - he was great!
In other news, Ive been planning my trip to Italy for November. What started out as a group of three of us, myself and two coworkers, has now grown to EIGHT! Myself, the two coworkers, my friend Shauna and her husband Jesse, my lovely cousin Erin, and our friends Sheena and Laura. It is going to be a blast!
My sister is still pregnant, and you would think that with a little niece or nephew on the way I would be busy with knitting and crocheting and stuff like that. You would be wrong. i haven't started a single thing, which is so unlike me. I have looked at plenty of patterns and thought of varous things I can make for the little one, but have yet to start a single project or even gotten the supplies for one. I suppose part of the reason that I haven't started anything yet is that we're not yet positive of the gender. Whenever an ultrasound has been done, the technician says that they don't see evidence of any "boy parts" but because of the angle they can't be 100% positive that its a girl. Evidently the little bugger is modest.
I do talk to the belly from time to time, saying things like "I'm your cool auntie. When your mom gets on your nerves, and it will happen, you'll come hang out with me. I'm the cool one who travels all over the place and will bring you toys from all over the world".
I am looking forward to being an auntie, a little scared at the thought of my sister as a mother though. If you knew her, you'd understand.
Given all of this, I am going to start crocheting an afghan today. It will be based upon a pattern I found a number of years ago that the body of the afghan was crocheted so that there were holes every other stitch, then lengths of yarn were woven through the holes, creating a pretty plaid like affect. I figure that I'll crochet the body in white and then can finish it when the little tyke is born, weaving in either pink or blue at that time. This way, at least I'm starting something that will be quick and easy to finish once the baby is born. I just wish I could find the original pattern - if I remember correctly it was a book of numerous afghan patters published by Red Heart and had some really pretty afghans, and some spectacularly tacky ones as well, I just have absolutely no idea what the title of the book was or what the cover even looked like.
In other big news, I'm no longer drinking beer. Not that this is some noble attempt to quit drinking or anything like that, I've just switched to wine is all. I have heart issues on both sides of my family, so red wine will help with any genetic factors I may have inherited. Plus, I'm trying to lose some weight before Italy and am cutting back on carbs which means, no beer. sigh. It hasn't been hard or anything like that - a glass of red wine at the end of the day is nice.
Posted by Vanessa at 2:48 PM 2 comments: Links to this post