Last night was my brothers last high school football game.
Unfortunately, they lost. Their heart just wasn't in it.
Earlier this week the team found out that although they had qualified for the playoffs, they wouldn't be able to play because of the incompetency of the schools athletic director. Twice during this season they had had new students tranfer in who were on the football team. The coaches all thought everything was good to put these new players in games. Afterwards they found out that the athletic director had failed to turn in paperwork to the league offices which made the players ineligible to go out on to the field. As a result, the team had to forfeit 2 preseason games and 2 season games. Even though the team was 7-2 on the field, they were 3-6 on paper making them ineligible for the playoffs.
The team they played against last night was undefeated for the season, and my brothers team started out strong, keeping the score even for the first quarter, but after a couple of 15 yard penalties for players dropping the "f-bomb" on the field (even though it was in their own huddles and not directed at anyone) they got discouraged and let the other team stomp all over them. The end score was 40 to 8.

In other news, I got my car back from the auto body shop last week and finally took it in to have the transmission looked at.
My mechanic came back with very bad news, more than I had anticipated. Not only do I need a new transmission, but something called the hub bearings is busted. I still don't understand exactly what that is, but if not fixed my right front wheel could fly off while driving down the road. Not good. Just to get the car up to where it would be safely operable would be about $3,500 (thats at my mechanics cost - he'd be cutting me a pretty sweet deal). To fix EVERYTHING thats wrong with it (including a leaking sunroof, the electrical to the antennae, and a few other minor things) would be another $1,000. Considering its a 1995 with over 172,000 miles, my mechanic doesn't think it would be a very good idea to put that kind of money into it. So, I'm going to test drive a new car tonight. I'd been looking at a used Toyota Matrix, but realized that the Pontiac Vibe is the exact same car (its a joint venture between Pontiac & Toyota) and a brand new Pontiac is actually a little less than a 2 year old Toyota, plus through my work I qualify for GM supplier discount pricing with Pontiac. This is what I'm test driving tonight... 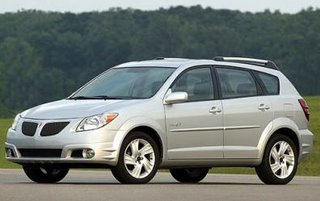 Does it look too soccer-mom-station-wagon-ish??
I wanted to keep some of the roominess of an SUV, but quite so big and better gas mileage. So far, this seems to be the best to meet all of those criteria.
I swear, I am not driving a new car home tonight. I still have to clean out my Explorer so that I can trade it in and move some money around to make the funds available for my down payment.

P.S. Kimananda, I have an Apple iBook G4 and I LOVE it. I would like to get one of the new MacBooks though.
Posted by Vanessa at 3:34 PM

If the soccer mom is a lesbian, then yes. It *does* look a little like that. :) Actually, I think it's quite cute.

iBook G3. I posted about it today as a matter of fact. lol

i would buy that in 2 shakes of my dogs tail.